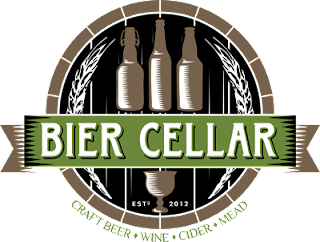 Get out and discover this new gem in the Portland area.
Here is information straight from them:


Our hours are expanded with this being a holiday week. We will be open Monday, July 2 from 12-8pm. The rest of the week we will also be open 12-8pm, including the 4th.

Saturday is our grand opening party. Allagash and Honeymaker will be in doing tastingsfrom 2-5pm. Mount Desert Island Ice Cream has made ice cream just for us using Allagash Black, Allagash White, and push pops out of Honeymaker Lavender Mead. Allagash will be sampling the Black, White, Victor & Victoria. Honeymaker will taste across their entire line.

We will have raffles all day for brewery and Bier Cellar schwag as well, all you have to do is stop in to participate. We will be open 10am - 7pm. Please spread the word!
Cheers! 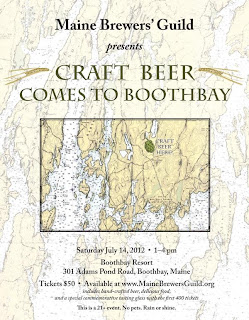 Where can you find all of the Maine brewers hanging out in one place on one afternoon?
The Boothbay Resort on July 14, from 1-4 with a special VIP session starting at noon.
Come out and support the Maine Brewers' Guild & its talented members! For more information & to obtain tickets, go to http://www.brownpapertickets.com/event/210307
Cheers :)
Posted by Cecily at Tuesday, June 19, 2012 No comments:

Email ThisBlogThis!Share to TwitterShare to FacebookShare to Pinterest
Labels: Boothbay


Come out this Saturday, May 12th, at Mama's Crowbar in Portland for the Allagash, Maine Beer Co., Rising Tide collaboration release of Prince Tuesday.  The party starts at 4 and goes until 9. Other beers will be on draft from the trio of breweries as well. Great food will be sold by Local Sprouts (cookout style- for $10 you get burgers, kielbasa, potato salad, coleslaw and apple crisp).  A portion of the proceeds will be donated to Portland Trails. In addition, the brewers will be there to visit.
Don't miss your chance to support your local breweries!  Cheers :)
Posted by Cecily at Wednesday, May 09, 2012 No comments:

﻿
Very, very, soon, I will get my act together & post about my fantastic trip to the Smuttynose Brewery.  Highlights to include: professional pictures by a mom friend & insider info from the brewers, along with hazy tasting notes.  In addition, the post will have a review of, Brett & I, which is Smutty's speciality sour release and is only sold at the brewery in New Hampshire.  Do I have your attention yet?  I hope so! Thanks for your patience... Cheers!
Posted by Cecily at Thursday, April 26, 2012 No comments: 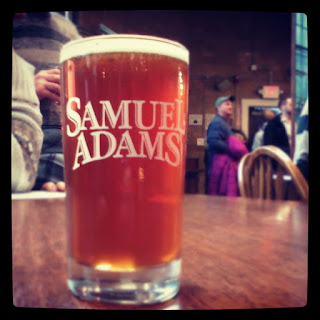 It's amazing to consider that one year ago, I began writing this blog.  "Amazing" may sound like an exaggeration but truly, I simply envisioned tasting beer and writing about it for my friends, as a way to have an outlet, from the day to day stay-at-home mom gig.  I didn't realize that through writing about beer, I'd meet great people who do the same thing and beyond. I've met down to earth local, Portland, Maine brewers; "big" time craft brewers like Sam Calagione from Dogfish Head; beer bloggers and social media gurus.  All of them have one constant theme:  sharing the craft beer love aka community onto others.  Which leads me to this next post.  I'm sharing the link to the very first ever Samuel Adams blog post, as a tribute to being the first brewery I ever reviewed. In addition, I met a craft beer buddy, Nick, this past November via Twitter at the Maine Brewers' Fest.  Ironically, he's a Mainer who is now doing the Samuel Adams newly debuted Twitter feed.  If you're on it, follow him at: @SamuelAdams Beer!  Congrats, Nick!  The next time you're back in town, let me know, I owe you a beer! Oh, and if Jim Koch needs a special palate to taste any upcoming beers, you know how to reach me!
Cheers!

Re-Post of my Samuel Adams Honey Porter review--the 1st ever on my blog!
Original post date:  1.7.11: (let's hope it's evident that the blog has evolved)!

The first beer to get reviewed in the blog--an ironic choice in that it has Boston routes as do I (BC alum & former Newton Public Schools Employee--Go Lions & Tigers!).  The fate of being first is not always easy--(1st children know this all too well) & sadly, it is only first because it happened to be the last beer in our refrigerator.  This lonely bottle was part of a six-pack purchased at a small beer store in early December in Scarborough, ME for under $5.00; quite the bargain, as it usually sells for $8 a six-pack.  Being the smart shopper that I am, I scooped it up only to realize, after the fact,that it was on sale because the expiration date was earlier this fall.  Alas, perhaps the taste could have been altered but given my desperation at 5pm, sometimes referred to by moms as the "witching hour," to drink anything with alcohol this past date wasn't a factor to me.  So while I was feeding the 6mos old in his high chair, flipping pancakes and burning pre-cooked bacon, I finagled the bottle opener and poured my first sips.


Taste:  the honey comes through & definitely leaves you with a sweetness on your tongue
*although it is a porter, it is not overly heavy and very smooth.
**Delicious choice with bacon and pancakes :)
Color:  dark almost like a coke
Thickness:  slight to moderate
Will it help me sleep better? Yes
Mom factoid: honey is a natural way to help little people (older than age 1) when they have a cough or sore throat--just give a teaspoon of honey during cold season!
Posted by Cecily at Friday, January 20, 2012 No comments: 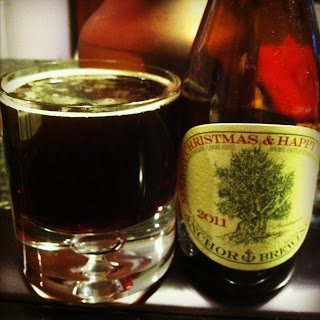 As told to us on the bottle, "This is the thirty-seventh 'Our Special Ale' from the brewers at Anchor.  It is sold only from early November to mid-January.  The Ale's recipe is different every year, but the intent with which we offer it remains the same:  joy and celebration of the newness of life. Since ancient times, trees have symbolized the winter solstice when the earth, with its seasons, appears born anew."
Brewery:  Anchor, San Francisco, CA
Style:  Ale brewed with natural flavors & with natural flavors added
Tasting Notes:
Aroma:  Pine, resin, Birch wood & subtle malt notes
Taste:  Malt forward (not overly sweet); husband described as tasting like drinking birch or root beer soda; detect pine flavors throughout but not in a harsh or bitter way.  Really unique and refreshing on the palate.
Color:  Amber stone
Thickness:  Medium to full body; half-inch caramel colored frothy head which lingers and leaves delicate lacing in the glass.  Nicely carbonated.
ABV:  5.5%; feels almost like a "session beer" where you can easily have more than one in a sitting.
Mom Factoid:  This holiday offering from Anchor was one of the top vote getters  in my, "What craft beer should go under my Christmas Tree" poll in December.  I can't believe this is the first year I remember having it.  Let me tell you, I really wish I had sought it out in previous years, as it's truly delicious.  I love the symbolism they describe on their bottle, of trees representing the winter solstice and the idea that there is a rebirth when the seasons change.  I think it's neat that a brewery puts some depth into it's beers.  Cheers!
Special Note:  I picked a Tuesday to review this beer as a shout out to my friends over at Brew England who coined the term:  'Tuesday Tasting' on their awesome craft beer blog.  It is an honor to have been asked by them to draw your attention to an upcoming event in March, called 'Cure Me I'm Irish'.  Please check out their website at http://brewengland.blogspot.com/ for further information on this worthwhile fundraising event & the breweries involved.  Thank you!
Posted by Cecily at Tuesday, January 10, 2012 No comments:

Promote Your Page Too

BLOGS WORTH CHECKING OUT!